NATURE IS NO RESPECTER OF NATIONS 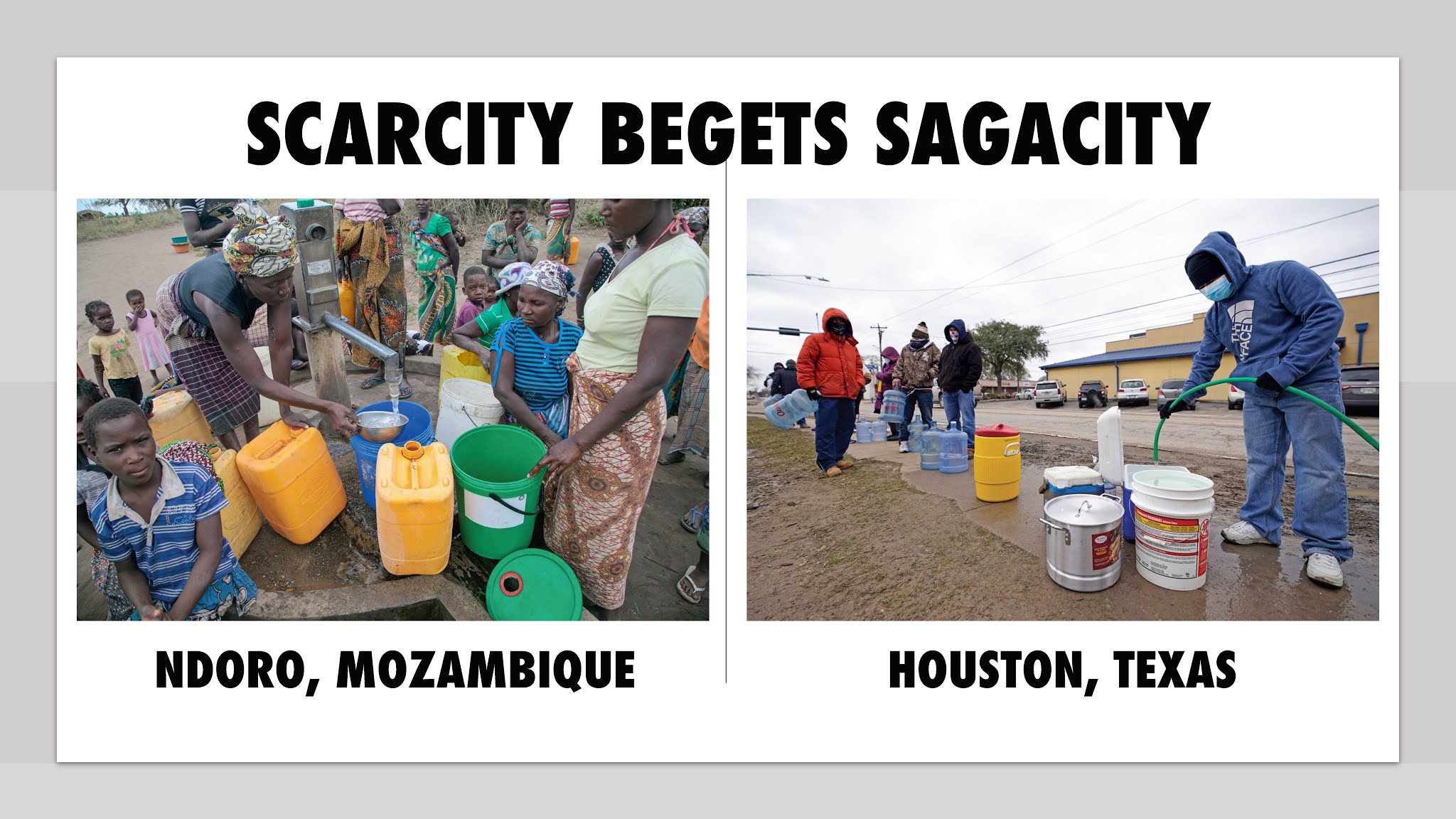 By Akin Ojumu
It is a humanitarian disaster of unimaginable proportions down there in Texas. Hit with sweeping power outages and widespread water shortages, brought about by a severe winter storm that passed through the state a few days ago, the people in Texas have been forced into taking a crash course in the daily lives of people in shithole countries; it is a shitty school of hard knocks.
With no water, no power, no fuel, and no cooking gas, for the first time in their lives Americans who live in Texas are having a firsthand experience in what it’s like to turn the tap and not a single drop of water comes out, and they are quickly learning what it means to go about in the dark for days with total power blackout.
Braving the subzero temperature outside, the good folks in Texas have had to go out, with their buckets and bottles, pots and jerry cans, in desperate search for potable water to quench their thirst, cook their meals, and perhaps take a bath. In the few places where water can be found, many are left with no choice but to stay in long lines for hours and hours in the bitter cold hoping and praying the water doesn’t run out before it gets to their turn. For those not so brazing to face the cold, the recourse is to gather snow from the ground and boil it into drinking water.
Cooking in these strange times in Texas is pretty much like they do it in most resource limited nations. In a country where to burn anything at all outside your home is a surefire way of inviting the police to come knock on your door, Texans have had to set down hearths and wood-fired ovens in their backyards and front yards to cook their food. To many Texans, the days of cooking in fanciful kitchens equipped with all manners of bells and whistles gadgetry seem like a thing in a distant past. These days, the air in Texas is a cacophonic mixture of smell of various kinds of food and aroma of varying spices.
Of the many lessons this Texas size calamity teaches us, one stands out poignantly. At the very core of our being, we are all the same. Black, brown, white or yellow, we are instinctively alike deep inside; we are all cut from the same piece of self-preservation cloth. Whether you are in dirt poor Africa or in stinkingly rich America, the similarity in the human instinct for survival is uncanny. Human misery and humanitarian disaster have a way of turning us into offspring of the same parents.
In the face of severe adversity, human beings adapt and, with great sagacity, adjust their behavior in conformity with their present reality. When confronted with power outage or almost dying of thirst, it’s a pretty thin line that separates the people living in the shithole countries of the world and those residing in the wealthiest nations on earth. The human will to survive impulsively kicks in and people will do just about anything to stay alive.
The other lesson to learn here is a rather sober reminder that human capability has its limit and our ingenuity is not infinite. As much as developed nations have done to tame nature and bend it to surrender to their will, nature remains a powerful and untamable force. Regardless of how affluent or technologically savvy a nation becomes, there’s still a limit to how much control human beings can exercise over nature. At the end of the day, rich or poor, we all are still at the mercy of the elements. Nature will forever remain an equal opportunity leveler and a no respecter of nations that metes out its punishment to poor and wealthy people alike.
Anyone who has lived in such excruciating conditions before can't but be touched by the pain and suffering of Texans. Please, remember them all in your thoughts and prayers.