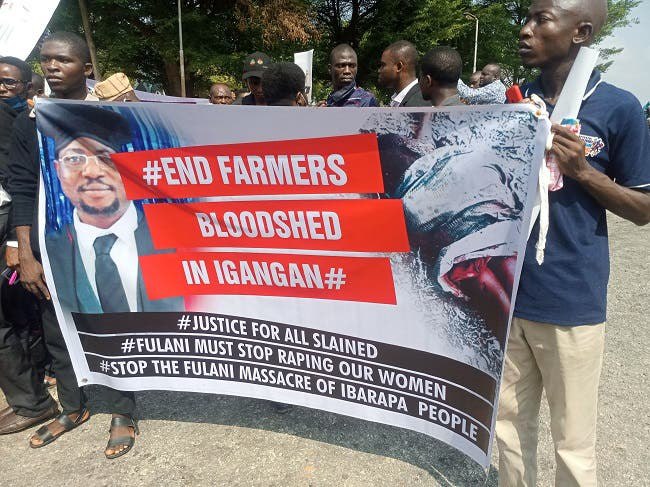 9.1 Night grazing should be banned henceforth
9.2 Underage herding is Inimical to security and hence be banned
9.3 Occupation of State Forest Reserves illegally is condemned.

10. MACBAN also suffers insecurity and kidnapping and thus desire peaceful coexistence.
11. MACBAN is ready for any peaceful move by the states to engender security.
12. Fake news is another issue that makes our security worse than solving it.
13. There must be an enduring framework with MACBAN in a way that will help address security issues.
14. That free range grazing must be stopped to avoid conflicts between the farmers and the herders
15. Strengthening alternative security arrangements and make them complementary to the mainstream security agencies in Nigeria.
16. MACBAN should embrace and be committed to modern breeding process by creating grazing reserves and practice ranching to prevent cattle roaming about.
17. Standing Committee comprising of farmers, MACBAN and the Government should be set up in each state (where they don’t exist) to ensure synergy and result.
18. We must create economic opportunities for our people and reduce opportunities for criminalities in our country
If you ask me, this is nothing but a bunch of garbage. I call BS!!! What's wrong with these fools? Who do these people think they are fooling? What koolaid are they drinking? Have they completely lost their minds?
These resolutions are empty rhetoric and a fat heap of hot cow dung. What you have here is a passive ineffectual nothing burger that will accomplish nothing. These are toothless aspirations that, at the end of the day, will not result in tangible actions that will curb the menace of the Fulani herdsmen.
For whatever reason, it seems as though the supposed "leaders" of the South West have signed on to a secret pact that permits the terrorizing of the people whom they are supposed to lead. Empty suit politicians, with some of the highest ratios of ambition to accomplishment of any politician ever, have resolved to grant ravenous wolves an open sesame and the free rein to slaughter the people they swore an oath to protect and preserve.
The cowardice of these feckless fools offends me greatly. That they are able to sleep at night while the people of the South West can't even afford to entertain a wink of sleep is troubling. The lack of concern of these compromised Judases about the helplessness and powerlessness the Yoruba people feel in their predicament sickens me to the core. I am mad that, by their deafening silence, Yoruba "leaders" have given their consent to the terrorizing of their own people. It is such a real shame and it infuriates me greatly.
At this juncture, what right do I have to criticize a Sunday Igboho? Who am I to denounce his actions? Can I in all honesty complain that a hoodlum has been asked to help get rid of another hoodlum?
I cannot, in good conscience, fault Sunday Igboho for stepping forward to offer his protective services to the Ibarapa people. It'll be disingenuous of me to say I'm against what he is doing to liberate the villages of Ibarapaland. Since the government in place has woefully failed and the "leaders" - political, traditional, and otherwise - have turned their backs to the plight of their own people, someone else has to do it. The vacuum of responsible and responsive leadership created must be filled.
It is just unfortunate that our "leaders" having sold their people into slavery and having reduced them to slaves in their own lands, the Yorubas now have to seek help from a man like Sunday Igboho. That we have been made to turn to a political thug whose own past deeds and actions put many of these politicians in office in the first place, sticks in my crawl.
The thought that this same man who had in the past been used by these politicians to create an environment in which they stole their elections is a reflection of how low the Yorubas have fallen as a tribe of once proud people. That Sunday Igboho, a man who has been involved in the shedding of Yoruba blood, is the one that has been called upon to come and save the people from bloodshed should prompt a deep soul searching amongst all Yoruba people.
If only the Yorubas would unite, organize, and quit the victim mentality, perhaps, they’ll be able to think and strategize and come up with a effective solution that will eradicate the menace that lurks in their farmlands and eliminate the terror that roams in their backyards. Maybe if the Yorubas learn to choose their leaders with greater care and deeper introspection, they would be able to find a creative solution to the problem they themselves have created.