THE FIVE STAGES OF GRIEF OF ELECTORAL DEFEAT 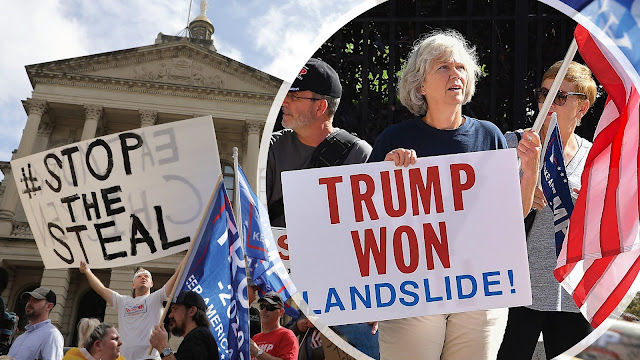 By Akin Ojumu
In any election, somebody’s candidate is certainly going to lose. For the zealots in the cult of Donald Trump, accepting the loss of their deity has been particularly unbearable; the landslide loss to a slow witted, almost senile, Sleepy Joe stings like hell. Many of these people are slow walking their way through the 5 stages of grief. It has been five weeks since the election was called for Joe Biden, a significant number remain stuck in the first stage of grief. And the way it’s going, a large percentage of the true believers will never get over the loss and, like mad king George, they’ll forever mutter, as though in a trance, “Trump won! Trump won! Trump won!
This is what the Trumpians are going through:
1. DENIAL
The first reaction is denial. In this stage, these individuals believe that Trump actually won the election – and by a lot. They cling to a false hope and alternative reality e.g., that the election results will not be certified. If the results get certified, the state legislatures will overturn it. Should the state legislatures fail to overturn the results, Congress will reject the results. And if Congress fails to do so, the Supreme Court will certainly rule in favor of Trump and declare him the winner of the presidential elections.
Concurrently, these folks organize worldwide night vigils, 24-hour fasting and prayer sessions, conduct prayer walk through battleground states, and they call upon God to send angelic forces – the Africa and South America Commands in particular – to overturn the election results and install their messiah as president in order for him to continue the work of the LORD for another 4 years.
2. ANGER
When these individuals recognize that denial cannot continue, they become frustrated, especially at proximate individuals. They allege that the election was stolen and votes rigged; that dead people voted, liberals voted multiple times, stuffed ballot boxes, vote harvesting, and that the Dominion voting machine system was manipulated to move votes from Trump to Biden, etc.
3. BARGAINING
The third stage involves the hope that these individuals can avoid the cause of their grief. Usually, the negotiation involves focusing on the things that get their juice flowing about Trump like the big MAGA rallies, they burrow themselves deeper into the QAnon conspiracy theory bubble and sink further into right-wing echo chamber where all they hear is information that reinforces their false hope.
4. DEPRESSION
During the fourth stage, the Trump cultists despair at the recognition that Donald Trump is a loser and that they are on a loser's bandwagon. In this state, the individuals may become silent, refuse visitors and spend much of the time mournful and sullen. They boycott all social media – many who were normally loquacious social media prognosticators have gone mute since November 7th – and will stop picking up phone calls.
5. ACCEPTANCE
In this last stage, these individuals embrace their loss and accept the inevitability of Sleepy Joe's presidency. To reassure themselves, you hear them make comments like, "The LORD is in control," "God allowed this to happen for a reason – to punish America," "God is mad with America," "It is the beginning of the collapse of America," "Churches will be shut down," Christianity will face persecution," etc.
To those who do not belong to the cult of Donald Trump, the 74 million Americans – and the hundreds of thousands more in shithole countries – currently making their way through the 5 stages of grief need your sympathy – and prayers. So, no schadenfreude please! Remember that you yourself have been in the wilderness of grief for the last 4 years and are just now recovering from your own grief. If you know anyone who is a Trump cultist, remember to send them a bouquet of flowers in this season of giving and rejoicing. Tell them, “Sleepy Joe sent you.”