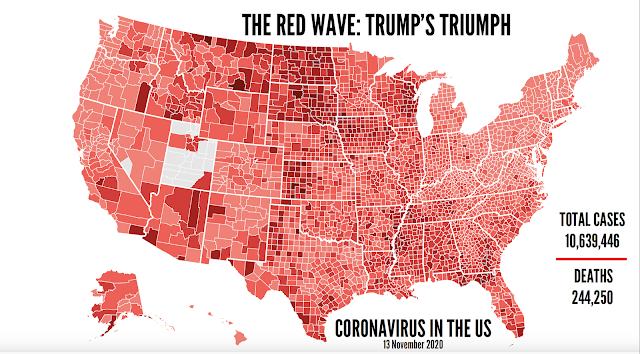 By Akin Ojumu
In the run up to the November 3 presidential election, Donald Trump boasted that a November red wave was coming. Surprise, surprise!!! The red wave has certainly come. All over the country, from the west coast to the east coast, from the sunbelt to the upper midwest, Americans are seeing a crimson red hue of COVID-19 cases blanket the nation.
On Thursday November 12, the country set a new record of 163,402 cases with 1,172 deaths.  According to the New York Times, "Over the past week, there has been an average of 134,078 cases per day, an increase of 72 percent from the average two weeks earlier."
While Donald Trump may have failed to create a red wave in the electoral college map, he has more than made up for it, far beyond his limited imagination, by painting the country red in a far more consequential way.
At a time when the country is getting redder and redder in coronavirus cases, Donald Trump burrows himself deeper and deeper in his hidey-hole in front of a TV in the White House. As Americans, in red states and blue states, die in record numbers of COVID-19, the man who promises to MAGA is AWOL from his lame duck presidential responsibilities, he is completely missing from action of leading a nation reeling from a deadly pandemic. Instead, he is curled up in bed sulking and chugging down McDonald's Big Mac, Meatloaf and Diet Coke, and tweeting away his outrage and conspiracy theories because he lost the elections to Sleepy Joe.