THE THINGS THAT GOD HATES 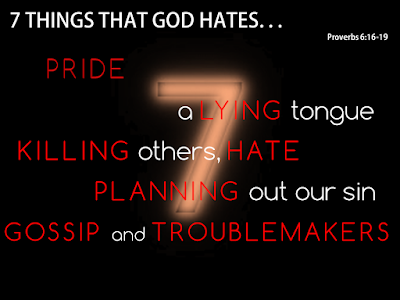 For those who haven’t yet compromised their principles and still value integrity, these are some of the words they’d use if asked to describe the present occupant of 1600 Pennsylvania Avenue, Washington NW, DC 20500. When most reasonable and decent people hear the name Donald J. Trump, the following are the adjectives that’ll come to their mind.

So, these are some of the Questions the Pro-Trump or Trump-leaning Christians must answer.

o   Which of these things does God hate?

o   Has God lowered His standard for what constitutes acceptable behavior?

o   Does the character of a president matter to God and the people anymore?

o   Which of these moral failings supports the notion that Trump is God’s anointed POTUS?

o   How many of these character traits will God overlook in order to grant Donald Trump a second term as the POTUS?

o   Is God perfectly okay with these behaviors as long as Trump is pro-Israel, recognizes Israel’s sovereignty over Golan Heights, and chummy with Benjamin Netanyahu?

o   Will God turn blind eye or turn His back when immigrant children are forcefully taken from their parents and locked up in cages like animals?

o   Is God perfectly okay that Trump turned the US military against US citizens peacefully protesting the murder of an unarmed black man by the police just to clear a path to go to a church for a photo-op?

o   Or will God give Trump a pass and accept these deep character flaws in the name of defending religious liberties and freedoms accomplished not by going on your knees but by secular means?

o   How do these moral and character flaws enhance the message of the Cross or benefit the cause of the Gospel?

o   Has any of these moral failings resulted in the spiritual revival?

o   How much is your soul worth, Christian man…Christian woman?

o   Will you trade your conscience, trade your integrity in exchange for secular legislation?