SHAME ON ALL THE ENABLERS OF EVIL 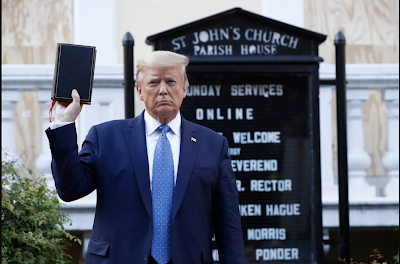 In a step rarely taken by a US President, Donald Trump turned the might of the US military against US citizens exercising their constitutional rights. Last night, the tin-pot dictator directed the US military to disperse a peaceful protest around the White House - firing flash bangs, plastic bullets and tear gas at protesters. For what, you may ask? Just for the sole purpose of clearing a path for himself and his senior staff, to take a walk to the nearby St John's Church for a photo-op.

The cynicism and pretentiousness of it all is stunning. This fake lover of Christianity  did not enter the boarded-up Church, he didn't inspect any damage at the Church, he didn't invite over the clergies of the Church to commiserate with them, he didn’t read from the Bible, he didn't say a word of prayer or ask anyone to pray, he didn't utter a single word of comfort or compassion. All he did was to hold a Bible aloft and have his picture taken by journalists. For the purpose of political photo opportunity, Donald Trump put his knees on the neck of the American people and he stumped his feet on the US Constitution.

The scene is so jarring, it breaks the heart to watch. This soulless man continues to make a mockery of the Christian faith and he debases everything that our faith stands for. Sadly, he is aided and abetted by his band of Evangelical followers, the collaborators in the debasement of all that is holy. For a morsel of bread and crumbs of political benefits, these enablers and appeasers of wickedness in the Church have sold their souls to evil and put a blemish on Christianity.

While the Evangelical bootlickers are busy boosting Donald Trump as Cyrus the Great, the deliverer of the Christian religion, he laughs them to scorn. Having rightly adjudged them to be weak and cowardly lots, he uses them like pawns for self-aggrandizement and self-promotion.

The repercussion of the betrayal of the faith has been devastating. Because of their obsequiousness and fawning, the bright line between righteousness and evil has been blurred. The defenders of a man with such blatantly gross character have, with their equivocation, turned the morality of Christianity into a joke. The false equivalence of the facilitators of iniquity of Donald Trump have turned Christians who believe in Christian principles into a laughingstock.

Yet, these same people who find it impossible to see any evil in, or admit any wrong by, Donald Trump are quick to chastise anyone who calls out his unrighteousness and cruelty. In their usual practice of deflecting and avoiding the elephant in the room, they are quick to throw out Scriptures about speaking words seasoned with salt, eschewing bitterness, and submitting to those in authority. The same people who see nothing wrong in the foul mouthed and cruel man they support, have the gall to call out those infuriated with the evil that this man unleashes on the world daily.

The irony of it all is completely lost on the accomplices of Donald Trump’s cruelty, immortality, xenophobia and bigotry; these Judases, who persistently see nothing wrong in Donald Trump’s actions and can never bring themselves to criticize him, have had their hearts and conscience seared hot with iron.

Shame on all those who have by their actions and inactions, and by their words and silence, enabled the disemboweling and fouling of everything that is righteous.