OBAMACARE SAVES LIVES BUT THE "PRO-GOD, PRO-LIFE" PARTY INSISTS ON KILLING IT 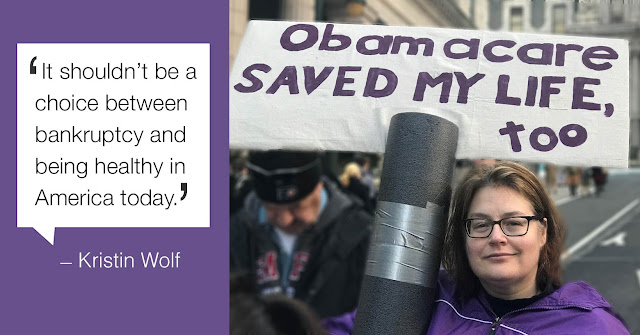 As reported in the New York Times, “The Trump administration asked the Supreme Court late Thursday to overturn the Affordable Care Act – a move that, if successful, would bring a permanent end to the health insurance program popularly known as Obamacare. In an 82-page brief submitted an hour before a midnight deadline, the Trump administration joined Republican officials in Texas and 17 other states in arguing that in 2017, Congress, then controlled by Republicans, had rendered the law unconstitutional when it zeroed out the tax penalty for not buying insurance – the so-called individual mandate.”

While the American people were sleeping, Donald Trump and the Republican Party went to the Supreme Court to seek the help of the Conservative justices on the bench to kill the Affordable Healthcare Act, the signature health insurance achievement of President Barack Hussein Obama. Being the children of darkness that they are, they put on the cloak of darkness and took a road trip to the Supreme Court in the dead of the night. At a time of the night when evil crawls out of dark holes and lurks around to devour all that is good and pure, Donald Trump embarked on a destructive rampage.

At the height of a highly contagious and deadly Coronavirus pandemic that has resulted in 2.4 million confirmed cases, close to 125,000 deaths, and left 40 million people without jobs, the coldhearted serial murderers of the rightwing scoundrels in the GOP set out to take away a public health measure that has helped many and preserved the lives of millions of Americans.

The casualties of this murderous act, God forbids it succeeds, are the "least of these" in American society; the poor, the needy, and the unemployed. If the Supreme Court rules in their favor and grants these midnight marauders their prayer to abort a popular health insurance policy that is saving lives, the consequences would be devastating. If Donald Trump gets his wishes and he is allowed to choke Obamacare to death, the ramifications would be far-reaching.

Here are a few of the devastating repercussions that will result.

2. One hundred and thirty million (130 million) Americans with pre-existing medical conditions (such as COVID-19, hypertension, diabetes, and even pregnancy) will lose their lifesaving protections.

3. Healthcare costs will skyrocket, and millions of Americans would immediately declare bankruptcy.

4. Health insurance company will be able to impose lifetime and annual dollar limits on coverage under individual and group health plans. For the family with a child who has cancer, the insurance will only cover treatment up to a certain limit and period after which the family will be left on their own.

5. The dependent insurance coverage for children up to age 26 for all individual and group policies will be eliminated. So, once a child reaches the age of 19 he can no longer be covered under his parents’ insurance policy.

6. In addition, the following healthcare coverages mandated under Obamacare will be eviscerated and the insured left without coverage. These include:

Preventive and Wellness Visits, including Chronic Disease Management
These include doctor visits, such as annual physicals, dental cleanings, well-woman visits, domestic violence screening, support for breastfeeding equipment and contraception. Some medicines such as immunizations, contraception, and allergy medications. Screenings, such as tests for skin cancer, high cholesterol, and colonoscopies.

Maternity and Newborn
Under Obamacare, this must be provided without cost since it is preventive care. This is a much needed benefit especially to the unemployed, immigrants, and young people who don't have insurance if they become pregnant.

Mental and Behavioral Health Treatment
It includes treatment for alcohol, drug and other substance abuse and addiction. Insurance companies avoid paying for these diseases, which need a long-term commitment. They often raise co-pays to as high as $40 a session and limit the number of therapist visits.

Services and Devices to Help People with Injuries, Disabilities, or Chronic Conditions
Most plans cover services and equipment that help Americans recover from temporary injuries, like a broken leg. Obamacare requires coverage for equipment needed to treat a chronic disease, like multiple sclerosis.

Laboratory Diagnostic Tests
Plans under Obamacare are required to pay 100% of the cost of tests if doctors use them to diagnose an illness.

Pediatric Care
Dental and vision care must be covered.

Prescription Drugs
Plans must cover at least one drug in every category in the U.S. Pharmacopeia. Out-of-pocket drug expenses count toward deductible. That wasn't true for all insurance plans before the Obamacare. They also usually offered this at a cost.

Emergency Room Services
Insurance companies charge extra if you go to a hospital that's out of their network or go without pre-authorization. Obamacare plans don't charge extra.

Hospitalization
Most people don't realize that a day in the hospital can cost between $2,000 and $20,000 a day. If you have a high-deductible plan or one with a low maximum, you may be surprised by how much you wind up paying out-of-pocket. Obamacare puts an end to this.

This lament of Job, which he gave at the depth of his misery and agony, comes to mind as I ponder upon the news that Donald Trump has again gone to the US Supreme Court in his Quixotic attempt to dismantle the Affordable Healthcare Act.

So, for an umpteenth time and after several failed attempts, the political party that prides itself as the pro-God, pro-life party and its God anointed, King Cyrus incarnate President continue in their effort to snuff out life from a lifesaving healthcare law. The very same people who claim to be on the side of life have shown they are nothing but angels of death and destruction.

The same day that half of million people who have lost their jobs enrolled into Obamacare, Trump wants to cut off the only lifeline remaining and available to millions of Americans. This is the same man who foolishly and callously withdrew funding for more than 13 COVID-19 testing sites around the country because testing makes him look bad. To hatch such an evil requires an uncommon level of depravity and coldheartedness.

Therefore, O LORD I pray thee, turn the counsel of the Ahithophel incarnates into foolishness. Bring upon them shame and disgrace. May misery and disappointment be their portion as they once again try to take way this lifesaving healthcare provision from the poor and the needy. Let them fail one more time.