WHAT EXACTLY MAKES SOMEONE A CHRISTIAN LEADER? 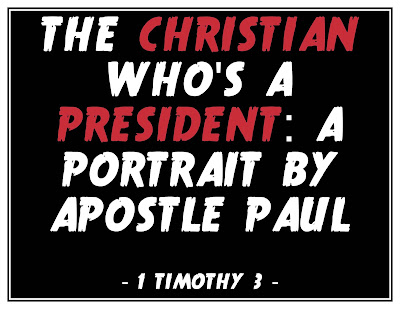 In an age of rabid political nativism, it’s easy to lose sight of who a Christian really is. And in an era where many so-called Christians are ensconced within the perimeter of their political bubbles, the characters that define a Christian leader can become blurred by intractable political myopia.

From time to time, it’s vital to take off the political blinders in order to clearly see the man that God considers His own, and it’s crucial to step out from within confines of the ideological penitentiary to understand God’s standard for a Christian who will be a leader – be it president, governor, senator, or otherwise. That portrait of a Christian leader was painted vividly by Apostle Paul in his first epistle to his spiritual son, Timothy.

Paul, in 1 Timothy 3, sketched a profile of the spiritual leader that is clear and encompassing and leaves no room for doubt or vacillation. Those same qualities and characters of a spiritual leader so described can well be rightfully and appropriately ascribed to a Christian who aspires for secular leadership.

So today, if Apostle Paul were to depict a portraiture of a Christian who seeks to be a president, this is how it’ll look like.

A Christian who desires the office of the president exhibits such a goodness of character that people cannot rightly criticize him. Honesty and integrity are his guiding principles. He's not a compulsive liar. His love for speaking the truth is so deep that he’ll rather tell the truth and suffer the consequences than lie to obtain an unrighteous reward.

This is a man who has never been married to more than one wife. He loves his one and only wife and he has been faithful and committed to her ever since the day he said, “I do”. Above all, he respects all women, he doesn’t ridicule their looks or mock their weight.

As a leader of men, he governs his own family with love and he commands the respect of not only his own children, but that of all the children in the nation as well; they all love him for his paternal tenderness. He’s a role model par excellence and a good teacher of men. Parents point to him as an embodiment of a good and decent human being; everyone wants their children when they grow up to be just like him.

Unflappable and cool in all situations, he’s not erratic, easily rattled or provoked and does not have a thin skin. He is self-controlled and sober minded at all times. He quickly overlooks offenses and never retaliates against anyone for perceived wrong. He leads not by the example of his power, but by the power of his example.

Everyone respects him for who he is and how he goes about his business. Even his enemies revere him and are impressed by the way he conducts himself and treats his enemies both in public and in private. Those who do not support or vote for him still think well of him and they hold him in high regard because of his goodness of character.

This man is not given to pride or susceptible to arrogance. He’s not a self-consumed narcissist who always thinks about himself and himself only, and he does not view the world from the prism of me, me, me. The interests of others are much more important to him than his own interest; so, he always puts others first.

His compassion for the suffering of others is legendary. He’s always ready and eager to help anyone in need. He gladly and graciously opens the doors of his home to all strangers and welcomes them with a warm embrace. He’s a man who genuinely cares about others.

This man is also a teetotaler. Strong drinks and drunkenness are not his fancy. He does not keep company with harlots. It cannot be said of him that he is promiscuous and given to lewdness. Such cannot be found in his past and he’s not given to such vices of weak souls.

With a reputation as a peace-loving man, he shuns quarrels and never picks fight with anyone. You'll never find him engage in a brawl. He’s ever so gentle and peaceful. You’ll never hear him use a profane language on anyone. In his words and deeds, he always seeks to lift and unite people and not divide or put them down. He sees himself as the leader of everyone and not just to a few ones.

Avarice and filthy lucre are not in his character. He’s not money hungry, neither is he driven to make money at the expense of other people. In all his businesses, he’s known for his virtue, dependability, and reliability; he is a man of his word. He has never defrauded anyone. He’s not known to use the loopholes in the law of the land to avoid paying what he owes; he has never ever declared bankruptcy just to avoid taking responsibilities for his debts. In fact, he’s such a good manager of his business that he runs them profitably without incurring any debts.

Reputed for the value he places in good preparations, he's known to read widely and consult broadly. He’s not a novice or an immature who lacks the experience to do the job. Wrapped in a robe of humility, he listens to the advice of those who are subject matter experts and he’s not a know-nothing braggart who arrogates to himself all knowledge and wisdom.

From the foregoing, telling a true Christian President apart from a pretender who's fluent in Christianese should therefore pose no challenge to anyone who is a Believer in God and His Word. Determining whether a politician is a Christian president should never be a subject of debate or controversy. Paul has already painted the portrait; all that needs to be done is to take the picture of the politician and compare it to Paul’s portrait. You'll quickly find that it’s quite easy to spot the difference.