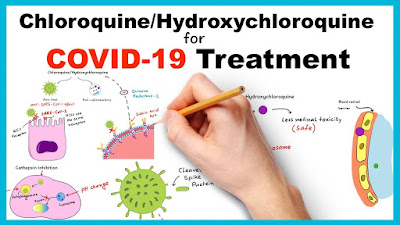 TITLE: Hydroxychloroquine or chloroquine with or without a macrolide for treatment of COVID-19: a multinational registry analysis

BACKGROUND: Hydroxychloroquine or chloroquine, often in combination with a second-generation macrolide, are being widely used for treatment of COVID-19, despite no conclusive evidence of their benefit. Although generally safe when used for approved indications such as autoimmune disease or malaria, the safety and benefit of these treatment regimens are poorly evaluated in COVID-19.

METHODS: We did a multinational registry analysis of the use of hydroxychloroquine or chloroquine with or without a macrolide (i.e. azithromycin, clarithromycin, erythromycin) for treatment of COVID-19. The registry comprised data from 671 hospitals in six continents. We included patients hospitalised between Dec 20, 2019, and April 14, 2020, with a positive laboratory finding for SARS-CoV-2.

Patients for whom one of the treatments of interest was initiated more than 48 hours after diagnosis or while they were on mechanical ventilation, as well as patients who received remdesivir, were excluded. The main outcomes of interest were in-hospital mortality and the occurrence of de-novo ventricular arrhythmias (non-sustained or sustained ventricular tachycardia or ventricular fibrillation).

INTERPRETATION: Use of a regimen containing hydroxychloroquine or chloroquine (with or without a macrolide) was associated with no evidence of benefit on in-hospital outcomes for COVID-19 (i.e. NO BENEFIT)

But instead, each of these drugs was associated with an increase in the risk of ventricular arrhythmias and a greater hazard for in-hospital death when used for treatment of COVID-19. (i.e. IT’LL KILL YOU)

RECOMMENDATION: These findings suggest that these drug regimens should not be used outside of clinical trials and urgent confirmation from randomised clinical trials is needed.