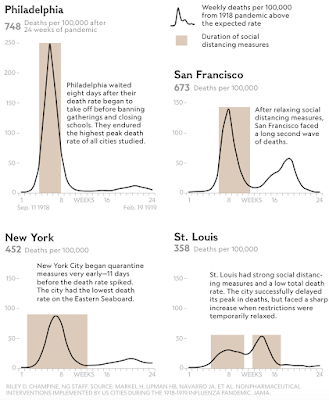 This graph compares the number of people that died from the 1918 Spanish Flu across 4 major US cities based on the timing and robustness of the social distancing measures instituted by each city.

The city, St Louis, that put in place the earliest and most extreme social distancing measure recorded the smallest number of deaths. Philadelphia, on the other hand, took the laissez faire, "give me liberty or give me death", approach. The city instituted social distancing measures late and consequently recorded one of the highest number of deaths.

Philadelphia detected its first case of a deadly, fast-spreading strain of influenza on September 17, 1918. The next day, in an attempt to halt the virus’ spread, city officials launched a campaign against coughing, spitting, and sneezing in public. Yet, 10 days later – despite the prospect of an epidemic at its doorstep – the city hosted a parade. Ignoring warnings of influenza among soldiers preparing for World War I, the march to support the war effort drew 200,000 people who crammed together to watch the procession. Three days later, every bed in Philadelphia’s 31 hospitals was filled with sick and dying patients, infected by the Spanish flu.

By the end of the week, more than 4,500 were dead. Flu cases continued to mount until finally, on October 3, schools, churches, theaters, and public gathering spaces were shut down. By the time Philadelphia’s politicians closed down the city, it was too late. Just two weeks after the first reported case, there were at least 20,000 more.

A different story played out in St. Louis, just 900 miles away. Within two days of detecting its first cases among civilians, the city closed schools, playgrounds, libraries, courtrooms, and even churches. Work shifts were staggered and streetcar ridership was strictly limited. Public gatherings of more than 20 people were banned.

The extreme measures – now known as social distancing, which is being called for by global health agencies to mitigate the spread of the novel coronavirus – kept per capita flu-related deaths in St. Louis to less than half of those in Philadelphia.

So, next time you hear your family member, pastor, friend, or social media acquaintances claim that social distancing is not science or doesn’t work or is some plot by some unseen forces to control people, just shake your head at them in pity for their ignorance and ask them, as polite as you can, to stop ridiculing themself.