CORONAVIRUS PANDEMIC UPDATE: A BUNCH OF HAPLESS SUCKERS DRUNK ON THE SUCKER’S PUNCH 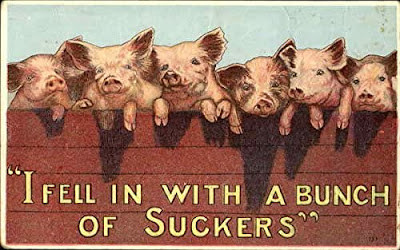 Our cognitive faculty enables us to process information and make decisions through a process of deductive reasoning. That cognitive prowess is what distinguishes us from animals or cave dwelling Neanderthals. At least, that's what we all like to think.

From time to time, however, this cognitive ability find itself at the mercy of our emotions and innate instincts. Our emotions and innate instincts often displace the cognitive ability, making it impossible for us to objectively examine facts and allow those facts to influence our preconceived notion; which is the process by which we learn, expand our knowledge base, and become wiser.

For certain individuals though, they are simply unable to free themselves from the clutches of this primitive mindset of emotions and innate instincts. They are, as it were, held in bondage by the lesser evolved, and are perpetually tethered to the more primitive, part of their being. This imprisonment by the less developed faculty makes it difficult for the cognitive ability to assume control. Consequently, such individuals become labile reactionaries and intellectual ignoramus.

In human psychology, this captivity to instincts and emotions is called "Motivated Reasoning."

Motivated reasoning scrambles the information processing and decision making ability, leading these folks towards conclusions that conform to preexisting notion, beliefs or ideas despite abundance of evidence to the contrary.

All conspiracy theories, and all those who peddle in such theories, are under the influence of motivated reasoning and their origin is the pit of hell. It happens when the demon of deception takes control of the mind and whispers lies into the ears of those who have surrendered their minds to lying spirits.

We know this because we live in the age of deception and Satanic forces are on a rampage of baloney. The beast of monstrous ferocity and his minions, like no other time in history, have been let loose on the children of men. And of all the evils forged in the fire of hell, none is more pernicious than falsehood.

Lie is the devil’s precious metal; it's his fool’s gold. The currency of exchange in hell is deceit. Right from the begin of time, mendacity has been the most effective weapon in the devil’s armory. Satan, in his subtlety, injected sin into the world, and with sin comes sickness, destruction and death. His lies culminated in the flood of destruction that Elohim brought upon the old world that washed away the wickedness and filth of that age.

In this modern age, the devil continues to serve the offspring of Eve his cocktail of lies. Hordes of humanity continue to drink and get drunk on the punch of Satan’s beguiling brew. Many there are who have become alcoholics hooked on the devil's trumpery.

With minds corrupted by lying spirits and reasoning faculty overtaken by demonic deception, some folks prefer to draw breath from a tank full of toxic fumes of conspiracy theories that ooze from the dark web and they choose to quench their thirst from the filthy water of the internet sewer.

The pity is many self-professing Christians are right there in the gutter with the rest of uncircumscribed humanity drinking from the putrid waters, corrupting their conscience and debasing their testimony. In the process they end up like noisy gong and clanging cymbal. Choosing the filth of perfidy instead of the virtue of truth, they end up sounding like unenlightened barbarians.

How is it that people of faith, who should know better, get so easily drawn into deception like moths into headlight? Why do Christians fall prey to conspiracy theories and are so prone to getting conned? The answer is simple. Religion and disdain for sound knowledge; a combination of a toxic brew that leads to ignorance.

When Christianity is reduced to materialistic enterprise, sensual ordinance, showbiz entertainment with lifeless rituals and a set of legalistic codes of dos and don’ts, it becomes mere religion incapable of leading people to the truth that can set them free. The moment the brain is abandoned, left on unused and allowed to rot and disdain for science is seen as a badge of honor and proof of spiritual enlightenment, it becomes impossible to acquire or accept knowledge and understanding that would make one wise.

Those who suffer this ailment are like reeds blown by the wind. They are tethered to motivated reasoning, easily given to sensationalism, and are mere puppets under the control of their puppet master who are spirits of deceptions. These poor souls are a bunch of hapless suckers who have had their fill of the sucker’s punch.