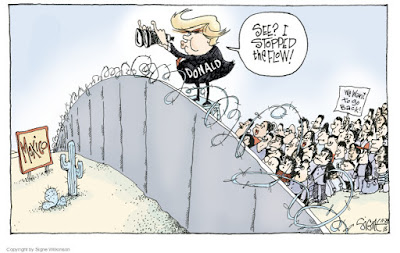 Tyrants all have one thing in common, they are adept at buck passing. Demagogues are all cut from the same cloth of BS, when things go awry, they resort to blame shifting. It is never in the character of strongmen to accept responsibilities for their leadership, character, and moral failures. They always point fingers at the nearest easy target for their ineptitudes.

When Rome burned, Nero played the fiddle and blamed the Christians. In Adolf Hitler's psychotic mind, the Jews were everything that was wrong with Deutschland and the cause of the impurity of the Aryan race. The Rwandan Hutus considered their fellow Tutsi countrymen cockroaches responsible for their economic woes.

As a result, Nero slaughtered the Jews, Hitler unleashed a pogrom on the Jews, and the machete wielding Hutus butchered the Tutsis. These despots and agitators left in their wake an unprecedented carnage of ruin and destruction.

Brought to its knees by an electron microscopic sized creature, the leader of the most powerful nation on earth looks for his own scapegoat. Having failed at all levels of leadership, crisis management, emotional succor, empathy, truth, trust, and integrity, the wannabe authoritarian casts a wide net to see which patsy he'll be able to catch.

First it was China, who he accused of deliberately causing a worldwide pandemic. This was the same China upon whom he heaped effusive adulation a few weeks earlier, praising them for their transparency and for the great job in the management of the pandemic.

When his administration’s roll out of the testing regime crashed and burned, it was the previous administrations that did it. Barack Hussein Obama contaminated the test kits developed by the CDC and the Bush administration is responsible for the widespread lack of swabs, reagents and supplies needed to ramp up Coronavirus testing in the country.

He incriminated the mainstream media of perpetuating a hoax when reports of the burgeoning pandemic filled the headlines and dominated the news cycle. CNN and New York Times are the bad hombres who inflated the number of confirmed Coronavirus cases to close to 800,000 and COVID-19 deaths to over 40,000.

To him, the state governors who cried for help for ventilators and widespread testing are crybabies looking for handouts from the Federal Government and waiting for the potentate to bail them out. And the state governors are mere whiners who compete with each other in the open market for PPEs, face masks, gloves, which in turn lead to price gouging. Andrew Cuomo, the governor of state of New York, must have inflated the number of hospital beds and ventilators needed to handle the more than 200,000 confirmed cases of COVID-19 in New York.

Those nurses, doctors, and healthcare workers overwhelmed with the number of COVID-19 cases and lacking the necessary personal protective equipment, who are calling on him and other politicians to do their job, are petty thieves; they are stealing gloves, face masks, and PPEs from the hospitals.

Instead of joining hands collaboratively and cooperatively with World Health Organization to fight the Coronavirus pandemic, he blamed them for conspiring with China and not telling him the truth. What he forgot to mention is the fact that he was provided real-time situation reports by dozens of his own appointed scientists and public health officials embedded within WHO and that he was briefed on a daily basis about the minute by minute updates provided by WHO officials.

Late last night, as he laid sleepless on his bed of misery – since there's no sleep for the wicked – his sickened mind devised the next iniquity and his darkened soul plotted another wickedness. After much tossing and restless turning, the tormentor of his soul whispered into his ears, "How about the damned immigrants?"

So, the man who fancy himself king tweeted;

"In light of the attack from the Invisible Enemy, as well as the need to protect the jobs of our GREAT American Citizens, I will be signing an Executive Order to temporarily suspend immigration into the United States!"

Is anyone surprised? Nah! No amazement there, only befuddlement. It is a familiar play from an old playbook devoid of any new formations. We always knew who he was. Being the creature of habit that he is, we knew he would eventually turn on the immigrants. It’s another gambit at distraction from a man who is an epitome of monumental smallness.

To rouse his rambunctious base of ardent supporters, it is to be expected that he would paint immigrants as the invisible enemies stealing American jobs and taking American lives. To the extent there’s any surprise at all, it is that it took this long for him to deploy the racist ploy.