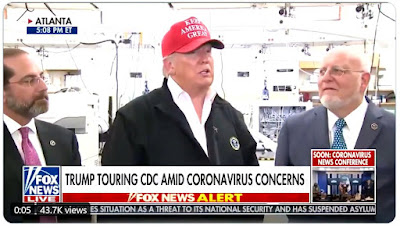 In the midst of a global pandemic that has resulted in the death of more than 20 Americans, terrified millions, and roiled the stock market, Donald Trump went to the CDC and did this:


To the "sane" persons who might have had doubts that Donald Trump is a complete jackass, this unprecedented behavior should convince you.

All Trump cares about is how this pandemic will impact his re-election chances. The man is soulless, devoid of empathy, unfit and unqualified to be President of the United States. And he will go down in history as the worst, and most corrupt, president this country has ever had.