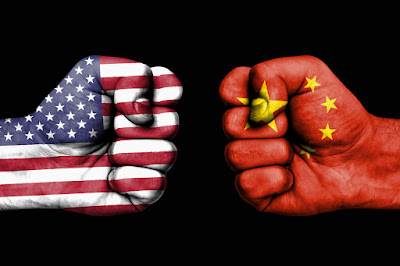 Playing out on the conservative news outlets and social media is a rather cynical and perplexing development. Several videos, from the folks on the right, have gone viral holding China responsible for the Coronavirus pandemic in the United States. Now, I don't know that I understand the purpose of this seemingly coordinated and choreographed campaign, and it is not entirely clear to me how the actions or inactions of the Chinese government are to be blamed for the handling of the Coronavirus pandemic by Donald Trump’s administration.

It is true that the pandemic started in Wuhan, China. Yes, the Chinese government tried to cover it up and downplayed the extent of the outbreak, but they failed. We know that many of the infectious disease epidemics in the past two decades have originated from China. It is not a surprise that the Chinese government are adept at misinformation, disinformation, and propaganda, and nothing they say can be trusted.

Is China also to blame for the slow response of Western nations to the pandemic when the Associated Press reported, in December 31, 2019, that China is investigating an "outbreak of respiratory illness in the central city of Wuhan?

Can anyone honestly blame China that Donald Trump ignored the report of his own intelligence agencies that warned of the seriousness of the Coronavirus and the effort of the Chinese government to downplay its severity?

Is China responsible when the US government failed to take action when the first case of Coronavirus in the US was confirmed in a patient near Seattle on January 21, 2020?

Was it the fault of the Chinese that Donald Trump, on January 22, 2020, while at the World Economic Forum in Davos, Switzerland, in response to a question about US readiness for Coronavirus said, "It's going to be handled very well," and also reaffirmed that he thinks China is in "very good shape?"

Is it China's fault that Trump took to Twitter on January 27, 2020 to say, "We are in very close communication with China concerning the virus? Very few cases reported in USA, but strongly on watch. We have offered China and President Xi any help that is necessary. Our experts are extraordinary!”?

Can the Chinese be blamed when on February 2, 2020 Donald Trump went on Sean Hannity's show on Fox News to declare, "Well, we pretty much shut it down coming from China?”

Was it the Chinese fault that on February 5, 2020, when the CDC began shipping coronavirus test kits to laboratories around the country, the tests failed suffering from a technical flaw and didn’t produce reliable results? Are the Chinese to blame for the US refusal to accept the Coronavirus test provided by the WHO even after the CDC developed tests have failed?

Is it the Chinese that made Donald Trump to tweet on February 24, 2020, that "the Coronavirus is very much under control in the USA? We are in contact with everyone and all relevant countries. CDC & World Health have been working hard and very smart. Stock Market is starting to look very good to me?"

Again, can we blame the Chinese when during a news conference in India on February 25, 2020, Trump said, “the Coronavirus, is very well under control in our country. We have very few people with it, and the people that have it are … getting better. They’re all getting better...as far as what we’re doing with the new virus, I think that we’re doing a great job.”?

Is it the Chinese that made Larry Kudlow, Trump's economic adviser, to tell CNBC on February 25, 2020 that the US has "contained" the Coronavirus and that the outbreak is unlikely to be an "economic tragedy."?

Was it China that made Trump to tweet on February 25, 2020, "CDC and my Administration are doing a GREAT job of handling Coronavirus, including the very early closing of our borders to certain areas of the world. It was opposed by the Dems, “too soon”, but turned out to be the correct decision. No matter how well we do, however, the..."?

Is China to blame when on February 26, 2020 Trump again tweeted, "Low Ratings Fake News MSDNC (Comcast) & CNN are doing everything possible to make the Caronavirus (sic) look as bad as possible, including panicking markets, if possible. Likewise their incompetent Do Nothing Democrat comrades are all talk, no action. USA in great shape! CDCgov..."?

Do we blame China when during a Feb. 28, 2020, campaign rally in South Carolina, Donald Trump likened the Democrats' criticism of his administration's response to the new coronavirus outbreak to their efforts to impeach him, saying "this is their new hoax," and also downplayed the severity of the outbreak, comparing it to the common flu?

Was it China that made Trump to tell Sean Hannity on March 4, 2020, that he believes people infected with Coronavirus may get better "by sitting around and even going to work?"

Are the Chinese to be blamed when on March 6, 2020, Trump went to the CDC, wearing his MAGA hat, and declared, "We have very low numbers compared to major countries throughout the world. Our numbers are lower than just about anybody. Be calm. It will go away." He boasted, "I like this stuff. I really get it. People are surprised that I understand it. My uncle was a professor at MIT. May be I have a natural ability. He lied saying, "Anyone who wants a test can get." Described his administration's response as "perfect" like the perfect call with the Ukrainian president. And called a State Governor a "snake" for criticizing his administration's lackluster response?

Is it the fault of the Chinese that Donald Trump told Republican lawmakers on March 10, 2020 that, “when people need a test, they can get a test? When the professionals need a test, when they need tests for people, they can get the test. It's gone really well,”? Even though at that time Coronavirus tests were not available and only about 10,000 people had been tested in the entire USA.

Do we blame the Chinese that it took until March 11, 2020 before Donald Trump declared a National State of Emergency as a result of the Coronavirus?

How is the Chinese to blame for the overwhelming of the US healthcare system? Is it the fault of China that hospitals across the US are running out of masks and personal protective equipment that healthcare workers had to make gowns from garbage bags? Do we blame the Chinese that respirators and ventilators are in short supply in the nation's hospitals?

This “blame the Chinese game” is like me blaming the mosquito for giving me malaria when I failed to take the necessary precautions to protect myself from mosquito bite and did nothing to prevent myself getting sick from malaria.

President GW Bush once famously said, “Fool me once, shame on...shame on you. Fool me – you can't get fooled again.”

To the extent that anyone deserves the blame for explosion of the Coronavirus pandemic in the US, it is not the Chinese. The shame is on the US government for getting caught flatfooted as the virus spreads from Wuhan, China to the shores of America. The blame falls squarely on Donald Trump’s shoulders for miserably failing the test of leadership at one of the most critical junctures in the nation’s history.