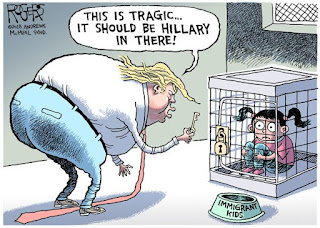 That the Nigerian government is incompetent and feckless is an established fact. The incompetence permeates every area of governance vis-a-vis economy, education, healthcare, finance, energy, power, infrastructure, etc. The breakdown in security, law and order in the country is just an extension of the perpetual blundering and bungling of Nigeria's political class.

As some would have us believe, the volatile and unpredictable security situation in Nigeria is the reason Donald Trump's administration imposed a travel on the country. This assertion cannot be further from the truth, and it flies in the face of everything we know about Trump and his expressed views on immigration.

Let me be clear, Donald Trump did not impose a travel ban on Nigeria because of the security situation in the country. The Nigeria's security upheaval is only a pretext for a far more sinister and insidious underlying motive.

Even with all the security chaos, inadequacy in the identification process, and less than optimal information sharing that exist in Nigeria, not a single Nigerian immigrant or visitor in the United States has been implicated in a terrorist plot or terrorist attack on the US.

The only reported case of an attempted terrorism involving a Nigerian was that of the underwear suicide bomber, Umar Farouk Abdulmutallab who, in 2009, attempted to detonate a plastic bomb sewed into his underwear while on a Northwest Airline flight enroute Detroit from Amsterdam. Umar, a son of a wealthy Nigerian, studied at the University of London, where he received Engineering and Business Finance degrees. He became radicalized after traveling to Yemen while he was a student in the UK. Umar's own father, when he realized his son was mixed up in bad company, went and reported him to the US authority, but he was not taken seriously.

As of 2017, the number of Nigerian immigrants living in the United States was close to 350,000 people. In addition to these, hundreds of thousands of Nigerians have traveled to the US on one category of temporary visa or the other. And among all of these hordes of Nigerians, just one has been involved in an act of terrorism targeted at the US. Whereas, Saudi Arabia alone have had 20 of its citizens carried out terrorist attacks against the US that resulted in the death of more than 3000 Americans. Yet, Donald Trump has not imposed a travel ban on Saudi Arabia. And Donald Trump and his son-in-law, Jared Kushner, are buddy mates of Mohammad Bin Salman Al Saud, the Saudi Arabia Crown Prince who ordered the murder of a Saudi journalist at the Saudi embassy in Turkey.

What this should show any fair minded and objective observer, is that Nigerians that come to the US are not terrorists and so they do not pose a security threat to this country. Apart from a few bad apples and miscreants engaged in criminal endeavors, most US-based Nigerians are ordinary hardworking and industrious folks, who have fled the economic uncertainties and hardship in Nigeria in search of a land of opportunity where they can make better lives for themselves and their families; and like immigrants before them, they are in pursuit of the American dream.

But for the sake of argument, let's assume that the security situation is the real motive behind the ban on Nigerians from immigrating to the US. If the of fear of terrorists is indeed the case, the type of Nigerians you would want to stop from coming to the US are those seeking temporary visas like those on visitors, students, or business visas.

Whether you are changing visa status, or someone is petitioning on your behalf, the application process for an immigrant visa is quite a lengthy and rigorous exercise that entails an extensive background check and security clearance on all parties involved. By the time your application for a US immigrant is approved, your entire life and the lives of your family members and acquaintances have been dissected and ripped apart. Every place you have been, everywhere you have lived, every school you have attended, every job you have held, everyone you have had a relationship with, have all been examined and scrutinized to make sure nothing in your past or present poses a security threat to the United States.

That's very much unlike the other visa categories which do not involve the same level of scrutiny.

In that regard, someone on a temporary visa constitutes a far greater security risk to the United States than an immigrant who has undergone such an extensive security investigation. A reasonable person could therefore conclude that the travel ban should have targeted those who went through limited background check and could potentially pose a security risk and not those whose lives have been laid bare during the immigrant visa application review process.

But that's not what Trump did. He deliberately targeted the immigrant visa category for a very specific reason, which I'll explain.

Donald Trump came to office with an agenda. He desires to purify the United States to make it look more European and Whiter. He telegraphed that desire in several of his comments running up to the 2016 elections and subsequently thereafter. He has, at various times, lamented that not enough white Europeans from the Scandinavian countries are immigrating to the US and has expressed a desire to have more of such immigrants admitted to the country.

Trump has characterized African nations as disease and crime infested shithole countries. And he has been reported to complain that Nigerians, once they enter the US, do not like to return to their villages.

Along with his other draconian immigration policies and actions, Trump's travel ban is a social experiment. It is a systematic way to vastly reduce the numbers of black and brown skinned people who become immigrants and then go on to become US citizens in the future. Having less of these type of people as US citizens is his ultimate objective. And it also serves the dual purpose of reducing future electorates who would, one day in the future, more likely to gravitate towards, and vote for electoral candidates from, the Democratic Party.

The only way to achieve this ethnic cleansing and racial purification of the United States, besides engaging in outright genocide, is through the immigration system. And that's the explanation for the countries targeted by the series of travel bans. Nigeria, the most populous African nation boasting of 1 out of every 3 black persons in the world, and that contributes one of the largest number of people to the US immigration pool, is a logical and convenient scapegoat of Trump's travel ban. For its sheer size of black people, Nigeria always had a large target on its back.

The brain behind this racial purification of America is Stephen Miller, who is Trump's White House policy adviser. Stephen Miller is a white nationalist and white supremacist who, leading up to the 2016 presidential elections, promoted white nationalist literature, pushed racist immigration stories and obsessed over the loss of confederate symbols after Dylan Roof’s murderous rampage, according to leaked emails reviewed by Hatewatch.

According to Southern Poverty Law Center (SPLC), the leaked Stephen Miller’s e-mails "showcase the extremist, anti-immigrant ideology that undergirds the policies he has helped create as an architect of Donald Trump’s presidency. These policies include reportedly setting arrest quotas for undocumented immigrants, an executive order effectively banning immigration from five Muslim-majority countries and a policy of family separation at refugee resettlement facilities that the Department of Health and Human Services’ Office of Inspector General said is causing “intense trauma” in children."

The SPLC continues, “in this, the first of what will be a series about those emails, Hatewatch exposes the racist source material that has influenced Miller’s visions of policy. That source material, as laid out in his emails to Breitbart, includes white nationalist websites, a “white genocide”-themed novel in which Indian men rape white women, xenophobic conspiracy theories and eugenics-era immigration laws that Adolf Hitler lauded in “Mein Kampf.”

Regardless of what the White House talking points say, security concern is not the real reason behind Trump's travel ban. A pervading racial resentment, and the desire to finally rid America of the black and brown skinned undesirables from shithole countries that are swept by abject poverty to the US shores, is what undergirds Donald Trump's broader immigration policy and the travel ban his administration has imposed on immigrants from African and Middle Eastern countries. This racial animosity is the reason immigrant kids are separated from their mothers at the US southern border, locked up in cages, and subjected to inhumane conditions without proper medical care.