GOP: THE PARTY OF DEBT AND DEFICIT 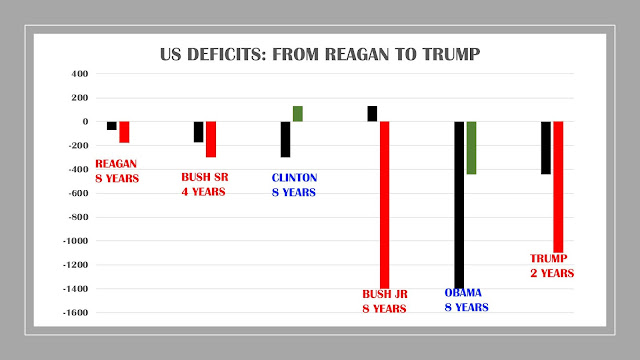 RONALD REAGAN was handed a deficit of $79 billion by his predecessor, he increased it to $153 billion by the time he left office 8 years later.

BILL CLINTON took over an economic deficit of $255 billion and, in 8 years, reduced it to an economic surplus of $130 billion.

GEORGE W. BUSH inherited an economic surplus of $130 billion and zero deficit. By the time he left office 8 years later, the US economy had collapsed, and the country had been plunged into a $1.4 trillion deficit.

BARACK OBAMA took over an economy in tailspin, a deficit of $1.4 trillion. In 8 years, the US economy has been turned around and firing on all cylinders. By the end of his presidency, the US deficit has been cut by 32 percent, from $1.4 trillion to $442 billion.

DONALD TRUMP inherited a rejuvenated, strong, and vibrant economy. The US deficit, when he came to office was $442 billion. Within 2 years, the deficit has ballooned to $1.1 trillion; an increase of 70 percent in 2 years.

US FEDERAL DEFICIT: The difference between the money the US government makes and the money it spends. If the government spends more than it collects in revenues, then it’s running a deficit.

US FEDERAL DEBT: The federal debt is the running total of the accumulated deficits.