NIGERIA'S PROSPERITY IS IN ITS DIVERSITY 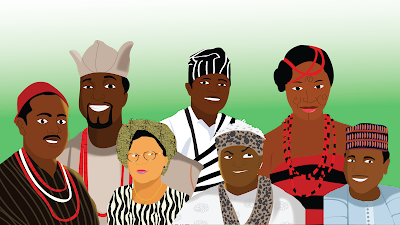 Say what you will about the people that set out to build the Tower of Babel, those folks had one thing the people of the world has never had. They lived in a world united in language and tongue. Having one language and a common speech, they realized very quickly that the sky is the limit for anything their heart desired. They knew that nothing they set their mind to do was unattainable. All they had to do was think it and it became a reality.

But like all men often who have the Adamic nature in their DNA, instead of using their common tongue for a good cause, they set out to build a city and a tower that reached to the sky; they wanted to be gods. As a result, confusion was brought upon them. The people began to babble in a cacophony of different foreign languages and were scattered across the face of the earth each to their own little corner of the world.

Ethnologue, published by the Summer Institute of Languages, SIL, is considered the most authoritative catalogue of world’s languages. By their latest count, there are over 7,111 distinct languages spoken by the world’s 7.7 billion people. In Nigeria alone, there are 525 individual listed languages.

With so many different languages and diverse cultures, it is impossible, when we look at the world, not to focus only on the differences that exist within the human race. As is so often the case, the chasm that separates us looms larger than the bridge that connects us. There is always the tendency to magnify the otherness and minimize the likeness that can be found in one another.

When we focus on the otherness, the image we see appears strange. This strangeness creates fear within us. The fear in us often generates distrust of, and hostility towards, the strange object of our fear. This is often the origin of many conflicts and many wars have been started all because of the failure to appreciate the commonness that exist among nations and peoples.

Despite our obvious differences, we all share a whole lot in common than we realize or willing to admit. Certainly, we may sound foreign to one another, and our cultures couldn’t be more different. It is true we may never agree on what we consider food; the Olokili (Hot Dog) of the Ondo Egis may be a turnoff for the Edos, the Degemas of Rivers may find the tuwo shinkafa of the Hausas appalling. Nevertheless, whatever the differences there are between us, when you drill down to the most basal elements of human experience, we are all very much alike. Regardless of tribe and ethnicity, all humans are a bundle of needs and a parcel of desires. Deep down, people everywhere are wired with fundamental necessities that are quite similar. The need for food and shelter cuts across boundaries. None of us wants to be a slave of anyone. We each want to be left alone to live our lives as we choose. Self-determination is important to all. Notwithstanding the cultural diversities, the pursuit of happiness is a daily endeavor common to all.

Among all of the things we share in common, however, none is greater than the yearning to be part of Something (or Someone) bigger than ourselves. From the farthest regions of the far east to the remotest parts of the far west, the craving to be connected to a bigger whole is the most common and most important need we all share. It is most the powerful of all human needs. Without this coupling with a bigger whole, every waking moment becomes a meaningless motion to nowhere. It is in the connectedness that many find contentment and purpose.

All the same, being part of a Something bigger is not the same as being part of Someone bigger. Connecting to the former tends to bring only temporary satisfaction and fleeting fulfillment. True purpose only comes by hooking up to One that is bigger than all. Those joined to the Source of life find fulfillment that endures for all time.

Such a diverse country as Nigeria, with its 525 recognized languages, is ground zero for this conflict between differences and likeness between its people. The inability, and sometimes the unwillingness, of the people to hear one another is a perennial challenge. The nation’s rulers, by exploiting rather than celebrating the diversity, have not helped matters either. For selfish reasons, they go to great ends to widen the gaps of differences among us rather build the bridges of the likeness that we share.

The most peaceful and prosperous nations are the most diverse. For Nigeria to know peace, Nigerians must embrace the differences that exist amongst us. In order for Nigeria to be prosperous and reap the bountiful benefits of the energy of many cultures, Nigerians must learn to embrace and celebrate the rich and vast cultural diversity that exist in the country. It is important for us to realize that Nigeria is strongest when it is one nation united, and the sum of our collective whole as a nation is much greater than the sum of the individual ethnic parts.

But this will only happen when we, as a people, realize that the things that unite us matter more than those that divide us. Until Nigerians yearn to be part of something greater than the individual ethnic and tribal affiliations, Nigeria will continue to wage a war against itself.