NIGERIA IN A FAST FALL INTO A STATE OF NATURE 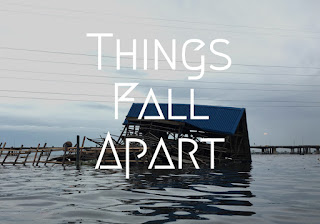 Much has been said about the deplorable living condition in Nigeria. The blogosphere, tweetosphere, and the mainstream media are replete with tales of woe and human misery that exist in the country. That the nation’s infrastructures are crumbling, or have crumbled, is no breaking news. Dilapidated schools churning out in droves unschooled minds, inhospitable hospitals where the sick folks go and never return, potholed roads that have become fields of broken limbs and cracked skulls, and a comatose power sector that cannot generate sufficient joule of energy to light a candlestick, are all so common in occurrence they no longer make front page news. These things are the norm and not the exception. Nigeria is the quintessential shithole country.

The Nigerian civil authority has pretty much abandoned the country and left it to fate. Lacking concern for the welfare of its citizens, successive governments abdicate their civic responsibilities of providing good governance. Those charged with overseeing the affairs of the nation have shown little interest in working to improve the well-being of the citizens. The result is that in Nigeria every household is its own government responsible for providing the basic necessities that make for decent existence; providing security, supplying power, ensuring availability of potable water, educating the youth, and making the immediate neighborhood roads motorable.

In the face of excruciating circumstances, the ironclad resolve of Nigerians to survive, and the unbroken will to make the best out of their agonizing situation, are the stuff of legend. “Shuffering and shmiling,” according to Fela Anikulapo Kuti – the legendary Nigerian musician – is the typical attitude of ordinary folks to the hardship and suffering they face every single day. The extraordinary ability to endure hardship and hope for a better tomorrow is, perhaps, the reason the nation has not taken a tumble into a state of complete anarchy.

Great thinkers and philosophers, dating back centuries, have written extensively about rudderless and leaderless nations like Nigeria. In their writings, these erudite scholars warn about the chaos and anarchy that could result in societies where there is absence of constituted civil authorities or where sovereign governments are weak and nonfunctional. One of such writings is the Leviathan.

The Leviathan is a masterpiece of political philosophy. It was written by Thomas Hobbes, a 17th century English political philosopher. Published in 1651 as one of the earliest and most elaborate postulations of the social construct theory, the book is about the structure of society and the legitimacy of sovereign governments. In the book, Hobbes enunciated the fundamental principles of a harmonious and prosperous civil society immune to disintegration from within. Strong civil authority and enduring institutions, Hobbes argued, are necessary to prevent the descent of a society into chaos and eventual collapse. Without strong civil authority, turmoil often ensues, and the absence of responsive and responsible government often leads to a state of disorder. This state of anarchy he called the “state of nature”.

The state of nature is characterized by the “war of every man against every man,” a constant and violent condition of competition in which each individual has a natural right to everything, regardless of the interests of others. Existence in the state of nature is, as Hobbes famously states, “solitary, poor, nasty, brutish, and short.” The only laws that exist in the state of nature (the laws of nature) are not covenants forged between people but principles based on self-preservation.

In the absence of a higher authority to adjudicate disputes, everyone fears and mistrusts everyone else, and there can be no justice, commerce, or culture. That unsustainable condition comes to an end when individuals agree to relinquish their natural rights to everything and to transfer their self-sovereignty to a higher civil authority, or Leviathan. For Hobbes, the authority of the sovereign is absolute, in the sense that no authority is above the sovereign and that its will is law. That, however, does not mean that the power of the sovereign is all-encompassing: subjects remain free to act as they please in cases in which the sovereign is silent (in other words, when the law does not address the action concerned). The social contract allows individuals to leave the state of nature and enter civil society, but the former remains a threat and returns as soon as governmental power collapses. Because the power of Leviathan is uncontested, however, its collapse is very unlikely and occurs only when it is no longer able to protect its subjects. – (Andre Munro, “State of Nature,” Encyclopedia Britannica).

Writing in the Internet Encyclopedia of Philosophy, Stephen Finn further described this state of nature.

In such a state, Hobbes contends that individuals have a "natural right" to do whatever they believe is necessary to preserve their lives. In other words, individuals in the state of nature are not constrained by moral or legal obligations as neither could exist prior to the establishment of a commonwealth. In the state of nature "nothing can be Unjust' since the 'notions of Right and Wrong, Justice and Injustice have there no place". Human liberty, for Hobbes, is simply the freedom of bodily action and is not limited by any moral or legal notions. – (Stephen Finn, Internet Encyclopedia of Philosophy).

Seventy years after independence, the sovereignty of the Nigeria nation – bought and paid for by the blood of the nearly 6 million children, women, and men killed in the nation’s first civil war – now hangs by the threads. With every successive weak and inept civil authority that assumes power in the country, the cord of unity that binds the civil society together is stretched further towards its elastic limit. Hobbes believed that without strong and capable government, human society will eventually end up into a state of nature. It is impossible not to think that Nigeria, with its perennial weak – and somnolent – government and institutions, is close to fallen, if it hasn’t already fallen, into a state of nature.

For all the resilience the poor masses of Nigeria possess, there is so much physical and psychological assault the human soul can endure without suffering a complete mental meltdown. With continuous and escalating onslaught on their livelihood and survival, an unsustainable sense of siege, like a pressure cooker, is building up among the ordinary Nigerians. Feeling pushed to the wall, it should surprise no one to see Nigerians lash out, one day very soon, as they decide enough is enough. When that happens, all bets are off. It will be end of us all, as nobody knows where it’ll all end.