A PRICELESS PIECE OF ART 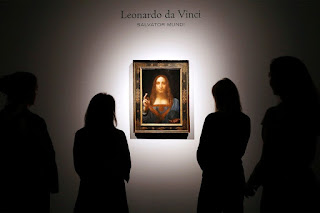 If you are an old fan of the Britain’s Got Talent Show – the UK equivalent of American Idol – you’d remember Susan Boyle. She was the singing sensation from Blackburn, Scotland, who on 11 April 2009 wowed the judges – including the Mr. “Acerbic” Simon Cowell – while auditioning on the 3rd edition of the popular show. And she was 48 years old.

Ms. Boyle didn’t look like much; she was fat and frumpy, frizzy-haired and squarely shaped. The youngest of nine children, Susan was a shy and solitary nobody, who lived alone with her cat. She had never gone out on a date and had never been kissed – well almost never been. She was the type we walk by on the streets, but never take any notice they are there; as soon as they register on the mind, they are immediately confined to the trash bin of inconsequential beings; deleted permanently from the temporary file of the memory hard drive.

But all that changed the day she opened her mouth, to let out that beautiful voice of hers, in the process stunning a snickering world, and knocking the smirk off our cynical faces. And her life was never the same ever since.

Scattered all over the landfills of life, are books that were never written, messages never preached, and almost certainly, souls that were never saved. Broken dreams, unfulfilled potentials, untapped talents, and unclaimed promises, all lay waste among the rubbles; victims of man’s icy heart and vitriolic tongue.

If you care to look, you will find a Susan Boyle living in your own neck of the woods. It is that child, who at 3rd Grade, still struggles with the alphabets, while his younger sibling, in kindergarten, is already able to write love letters to their parents. Susan Boyle is the domestic help, sent by her parents from the village to become a hewer of wood and drawer of water in our homes. He is the brother in church who has asked for a loan in order to pay his rent. And she is that sister with thick tribal marks, like gullies, etched on both her cheeks; she is 35 and still waiting for the man she can call her own.

From the beginning of time, men have fawned over the naturally endowed: the comely, the hairy, the strong, and the wealthy have often been regarded as the greatest of all. The poor, the weak, and the ugly, on the other hand, have not fared so well; they’ve been despised, shunned, and scorned since God knows when.

Nimrod was the first to be a mighty one in the earth (Genesis 10:8). Saul was the most handsome man in Israel, head and shoulders taller than anyone else in the land (1 Samuel 9:2). And then there was Samuel who took one look at Eliab, Jesse’s first son, and thought, “Surely this is the Lord’s anointed!” But the Lord said to him, “Don’t judge by his appearance or height. The Lord doesn’t see things the way you see them. People judge by outward appearance, but the Lord looks at the heart.” (1 Samuel 16:6-7).

In this generation, the Gen X universe that we live in, all that glitters is considered gold and the glamorous things of this life are celebrated beyond measure. If you are fat and flabby in this world you’ve got yourself to blame, but for those who are lean and slim, you know no shame at all. The eloquent preacher, with the gift of oratory and the theatrics of a used car salesman, draws the largest crowd of all. However, the one that is slow of speech and slow tongue, like Moses, leads but no one follows.

It is the way of our world and we behold it daily on our TV screen. The burning of incense to the idol of glitz, style and sophistication. It is a world where drabness, dullness, and plainness have no place at all, or it is at best barely tolerated.

“Yet we all possess this precious treasure in frail, human vessels that the grandeur and exceeding greatness of the power may be shown to be from God and not from ourselves.” 2 Corinthians 4:7 Amplified Version.

By sheer act of defiance, and a stubbornness that could only have come from on high, Susan Boyle stepped out of the shadows of obscurity, to teach the world a thing or two about meekness. She reminded us to always respect the gift in each and every one of God’s creation. Ms. Boyle endured the ridicule, the vicious snickering, and the offensive attitude of the entire world, just to prove the point, that we all are beautiful on the inside.

Susan Boyle story is a reminder that there is more to you and I than the ordinariness that the world chooses to see. And there is more in each of us if only the world cares to take a look. We are each a remarkably and wondrously made work of Divine artistry; a priceless piece of art.

Ms. Boyle went on to become a celebrity. Her fame and singing prowess have earned her invitation to sing for the Queen and the Pope. She is reported to have sold over 19 million albums worldwide as of 2013 and has also received two Grammy Awards nominations till date.