THE NIGERIA POLITICAL CLASS: A BROOD OF SORE LOSERS 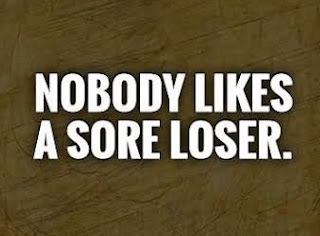 In a country like Nigeria, the democratic experiment is still infantile, and electoral process isn’t always without serious flaws. Often, the elections are characterized by amateurish glitches and cynical misses. Many of these irregularities are partly man-made, some are a result of antiquated machines, and they are all due to the widespread systemic  inefficiencies that are predominant within the society at large.

Nigerian politicians of all stripes engage in one type of fraudulent electoral practice or the other. They all buy votes, snatch ballot boxes, and employ political thuggery to intimidate their opponents. Inducing and, occasionally, pressuring election officials to falsify and fabricate election results is a tried and tested modus operandi of our politicians.

The party that comes up victorious is often the party that has done a better job at the game of fraud at that moment in time.

When the dust settles, the winning fraudsters go on to pillage the nation, while the sore losers, in order to realize their blind ambitions and further their selfish interests, try to plunder the nation by inciting it to go to war with itself.

Nigeria must resist the debased urges of dubious politicians. Peace must reign in our land.