THE NIGERIA RULING CLASS: A VESUVIUS OF MENDACITIES 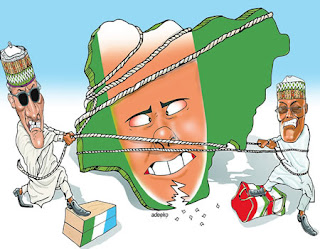 Buying a used car is a perilous undertaking. It is very much like swimming in shark-infested waters, the chance you’d come out alive is slim, and the probability of being eaten alive is near certain.

The used-car market is full of unscrupulous people – men and women who will do and say anything to sell you whatever vehicle it is on their lot. Selling lemons to unwitting customers is how a used-car salesman makes his precarious living. Without the slightest hesitation, he’ll strip you of your hard-earned cash in exchange for a buffed-up contraption that is hundreds of thousands of miles over its mechanical limit.

You can easily tell a used car salesman from a distance. He dresses nice, smells nice, and talks nice. The moment you step into his lair, he rolls out the red carpet and makes you feel like the best thing that has ever happened to mankind since the slice bread. Like a pet dog welcoming a long-gone owner, the used-car salesman fawns over you, pouring into the empty cup of your rapacious ego a generous serving of servile flattery.

Do not let his display of excessive pusillanimity fool you. His sheepish groveling is a tool of his tradecraft. By seeming to discard self-respect, he’s only putting on a show to weaken your defenses. The grotesque obsequiousness is just to make you lower your guard. If you pay close attention, and you read between the blurry lines, you’ll quickly discover that every word is a dubious scam, every act is a cynical ploy, and every out of this world offer is a cascade of cold and calculating playbook to make you jettison common sense and do something that makes no sense, and that is clearly not in your best interest.

With characteristic lying tongue and cunning craftiness, the Nigeria ruling class is akin to the used-car salesman. Lacking originality, they resort to the same old smoke and mirrors strategy of the used-car salesman. To perpetuate their stranglehold on the Nigerian people, the powerful men of Nigeria combine their subterfuge with crass intimidation. Disguising their modus operandi of crude chicanery in a costume of religious and ethnic fervor, the poor masses of Nigeria are sliced into factions of pious zealots, and the oppressed of the land are diced into riotous camps of nativist militants.

Feeding a gullible nation with false hopes and empty promises, the Nigeria ruling class are adept at constructing skyscrapers of calumny that are nothing but a pie in the sky. Using the news media, the social media, and the Nigeria airwaves as conduits, the ruling elite pump their pitiful propaganda of change, and they push their mediocre manifesto of excellence into the hearts and minds of the impressionable masses.

The Nigeria ruling class dangles a morsel of meat before the hungry horde, and like Pavlov’s dogs, the people are conditioned to accept the status quo as the only way to govern a nation. At the sound of their tuning forks, the mouths of insensate Nigerians begin to drip copious amount of saliva in earnest anticipation of the crumbs that may fall from the Masters’ table. Thus, it is that Nigerians have come to succumb to the reality of their present existence. They have become so inured to the paradigm of their experience, that they find incredulous, and unable to accept, any effort made to cause that paradigm to shift even by the slightest measure.

Having trapped the Nigerian masses in a mind cage that has no fence, the ruling class goes about their business of pillaging the wealth of the people without a care or any fear of retribution. Through deft and careful use of the machineries of the two major political parties, the political class has achieved considerable success at perpetuating their corrupt influence and consolidating their power over the people of Nigeria.

The carnage of the nation by the Nigeria ruling class has gone on unhindered for many years. But now, the vehicles of their corruption – APC and PDP – have grown old and have begun to show the wear and tear of old age. These two clunkers are creaky, rusty, and losing the potency of yesteryears. With leaking oil and worn-out shocks, the hitherto well-oiled machines are far from what they used to be.

Yet, the political class continues to smooth talk the nation into buying these two lemons. Like the used car salesman that they are, the ruling elite wants us to believe that these two vehicles, which have long exceeded their mechanical limits, are the only means by which Nigeria can get to the promise land. By all means necessary, they want to make Nigerians to not see the futility of hanging on to the two rust buckets that should have long been retired to the junkyard of broken relics.

Many otherwise reasonable Nigerians have also been sold on the notion that ditching these two contraptions for a brand new vehicle is not the way to go. These Nigerians have come to believe that a new vehicle is not strong or powerful enough to take the nation to our desired destination. Drunk on the Kool-Aid of the ruling class, even smart Nigerians have been conned into thinking it is better to stick with the two old faithful and to continue to fix the myriads of issues that keep cropping up every so often. If tomorrow the brakes fail, they say to repair them; if the transmission packs up, you change them; and if the engine knocks, you do whatever you can to get the jalopies back on the road.

Wake up from the drunken somnolence, Nigeria. Do not get sucked into believing the hocus-pocus disguised as sincere desire to solve the nation’s innumerable challenges. The Nigeria ruling elite is a Vesuvius of mendacities peddling a bill of goods. Their innards is a magma of pure destruction. Like a volcanic eruption spewing out hot ash and viscous lava, they suck all the air and consume everything along their path. The political class is made up of brood of vipers. With deceptive stealthy, they strike the prey sinking the fang deep into the flesh to fill the body with paralyzing venom.

Nigerians, as you go to the polls on election day, you must remember that we have an opportunity to rid the nation of the political oligarchy as represented by the two old and tired vehicles. These two conveyance of political malfeasance and patronage are obsolete and have outlived whatever usefulness they once had. Keeping them around with the false hope they can be fixed from within is pointless as they are beyond repair. Attempting to panel beat them into shape is fruitless, and amounts to pouring scarce resources down the drain.

Like old dogs that cannot learn new tricks, the old relics should be put out of their misery and laid to rest in the junkyard of political history. It is time to give Nigeria the much needed upgrade befitting of a great nation like ours. We must trade in these two beat up clunkers for a modern vehicle equipped for the 21st century world in which we live.