POSTPONEMENT OF NIGERIA ELECTIONS: IS ONE WEEK ENOUGH TIME TO FIX INEC’S PROBLEMS? 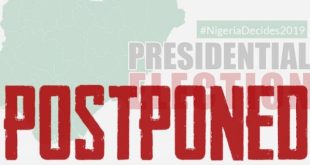 To wait until the early hours of the morning of the elections to announce the postponement of the elections is, for all intent and purposes, awful. Failing to identify, long before now, that there are insurmountable logistical hurdles that make today’s elections infeasible is a clusterfuck of epic proportion. Every time we think INEC has reached the ceiling of ineptitude, they just keep raising the bar.

Besides the incompetence, of those charged with refereeing one of the most important elections in our nation’s history, that this speaks to, this late hour decision raises a cloud of suspicion – the size of a giant twirling tornado. In the mind of many Nigerians, the leadership of INEC is not only unfit for the job, they are also perceived as being in cahoots with, and putting their thumb on the scale in favor of, one particular political party. That is a recipe for a national disaster.

Having said that, to the extent that this decision was made in good faith, the postponement of the elections can also be viewed as a smart move on the part of INEC. Some would say the organization deserves some credit for at least realizing, and admitting, their lack of readiness to conduct a free and fair elections devoid of logistical snafus. The rationale behind this thought is that it is a much better proposition to have the elections delayed for a week in order to get it right than to have them plow ahead ill-prepared, ill-equipped, and make a mess of the entire process. That, some would argue, is a much worse outcome.

Howbeit, one week is not that much of a long time. Before you know it, it is next Saturday. The cynic in me struggles to imagine how INEC can fix all of its problems within that period of time to enable it to conduct a credible elections.

I guess we’d have to wait and see.